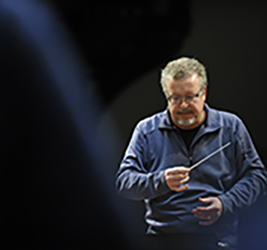 Born in Toronto, Jurgen Petrenko has Bachelor and Master of Music degrees from the University of Toronto.  After many years as an organist and freelance musician, Jurgen joined the CBC where he worked as a producer of programs including Choral Concert, Saturday Afternoon at the Opera, the Opera Quiz, Critic’s Choice, Take Five, and as executive producer of Music and Company.  He has also presented over 400 weekly Organ Thursday features.

Jurgen has served as the general manager of the prestigious Elora Festival, and has conducted for Toronto Operetta Theatre. He regularly plays harsichord with the Kitchener-Waterloo Symphony and is the artistic director of the Centre Wellington Singers. He currently is the organist of St. John’s Anglican Church in Elora and teaches oratorio to the graduate voice majors at the Glenn Gould School at the Royal Conservatory of Music in Toronto.

Jurgen is the co-founder and artistic director of Toronto Classical Singers with whom he has conducted dozens of the major choral/orchestral works.  He is also in demand as an adjudicator and organ accompanist and can be heard on numerous recordings on the Naxos and independent labels, accompanying St. John’s Parish Choir, and the Elora Festival Singers.